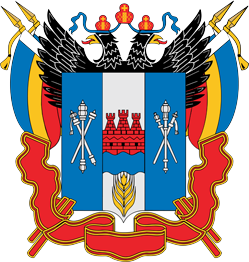 The emblem of Rostov region represents a heraldic shield. On its azure field there is a silver pillar with the dark red three tower-fortress wall standing on the azure wavy belt; in the extremity there is a golden ear, that covers the azure wavy belt. The pillar is accompanied by the historical Don regalia: to the right there is a silver cold steel on the silver horse-tail and crossed dresser; to the left there is a silver club on the same dresser with the eagle and crossed horse-tail. The shield holder is represented by the black two-headed eagle with golden beaks and dark red tongues, that appears above the shield and who has the Russian Emperor crown on each head and is crowned by the big Russian Emperor crown with azure ribbons in the middle. Behind the shield there are four crossed flags of Rostov region on the golden staffs with the lance point, cords and tassels. The staffs are weaved again with the Lenin Order ribbon. The fortress wall means that from the end of the XVI century the Great Don Cossack Army protected the southern borders of the Russian State, azure wavy belt means Cossacks settlements along the Don river and its tributaries, golden ear means the high level of development of the grain culture and farming in the region. On the blue field on the both sides of the shield there are the symbols of ataman's power: cold steel and a club. To the top there is a state emblem represented by the eagle. Crowned two-head eagle is the historical attribute of the emblem of the Great Don Cossack Army. It was granted to the Don region and the Great Don Cossack Army by Alexander I in 1803 and represented the relations with the Russian Empire.